As far as our first record, I just remember thinking it was time to make a record and knew you had put out a few records. We loved you guys and the label so we just asked if you would be interested in releasing one with us. Here we are ten years later still pretending to be good at this. Thanks for going along.

Brandon: Tell us more about that first record, particularly around writing and recording it.

Andy: That time (and writing those songs) was a pretty major turning point in my life. They were really the first songs I ever wrote that I was truly proud of. The songs I wrote and bands I played in before were like a bike with training wheels. It felt like the training wheels came off with this band. I realized I could write about and say anything I wanted. That probably seems like the most obvious thing to most people, but it took me about five years to figure out and it was a major revelation.

Recording it was a totally new experience for me. I’d never done more than bedroom demos before that. And we were a three piece band back then, on top of the fact that for some reason I had a strict “no pedals” rule for myself. It was a challenge making some of those tunes feel full. There was no plan for any parts other than one guitar, a bass, drums and nervous vocals. We were pretty green.

Brandon: Did you think you would still be making music 10 years later, let alone releasing another album on the label? 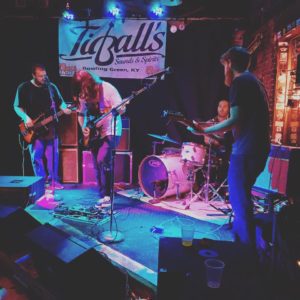 Brandon: What has changed for Why They Came since then? How is writing, recording, and performing with a steady lineup different? Are there challenges as well as advantages?

Andy: Really, everything has changed. Just by the nature of life, I was 18 when the band started so I’m a very different person. On top of that there was a period when there was no band at all and I was limping along solo. Luckily I was able to talk a few of my buddies into joining this circus. Every member is totally individual and brings something unique to it. I couldn’t be more thankful to have these guys with me now. The main challenge is coordinating practice, shows and recording between 4 adults with jobs and families. The main advantage is it’s possibly the most fun thing in the known universe.

Brandon: Tell us a story about your favorite two songs from that first record.

Andy: I don’t know about favorite but “Tendencies…” is the only song from that record that really ever gets played live anymore. And even that is pretty rare. That song (like many from that point in my life) was was inspired mostly by a young lady that I pined over for years. My life was pretty much ruined from the moment I saw her. It took about 7 years but….. we’re married now. So that’s pretty cool.

Brandon: Adam Moore from Foxhole designed the artwork for your first record. Tell us about that. Did that play a part in asking him to design the cover art for the new Christmas album?

Andy: I think we have asked him to design a cover for our last two projects. It just worked out that he could do it this time. He’s such a sweet and talented guy. I’d say that definitely played a part in wanting to work with him again. The cover is probably what I’m happiest with about the first record. It’s beautiful.

Brandon: Speaking of the new Christmas album, tell us about A Stick Full of Bells. It’s being released one year after your last full length LP following 5 years of giving away some really fun Christmas music. What took you down this road?

Andy: I think the first “Holiday Special” EP was recorded and released in 2012. It was totally on a whim that we even did it. Josiah and I thought it would be fun to record a few Christmas songs on his iPad and just give them out for free. Redfoot was probably a big influence on that actually. We wanted to have something to give people at that year’s Redfoot Christmas, which we were very happily invited to play. It was so much fun to do, it became a tradition to release one every year. After five years it just seemed to make sense to polish a few of them and record a couple new ones for a full length.

Brandon: Bad Apple Records sent Why They Came and Stellar Kin to play the Decapolis Label Showcase stage at Cornerstone in 2008. What was that experience like?

Andy: It was like not taking a shower or pooping for a week. And only eating peanut butter sandwiches. Apart from that it was a lot of fun. It was great to basically live in a weird little music town all week. I got to see some of my favorite bands and play music and camp out with some of my best buds. I seem to remember someone from PETA didn’t like our “pistol whip a goat” t-shirt very much.

Brandon: What has it meant to you for Why They Came to belong to a family of artists like Bad Apple Records?

Andy: It has meant some of my favorite shows I’ve ever played. Some of the most fun I’ve had in my life (specifically on tour). Always feeling supported and encouraged to keep playing in a silly rock and roll band. And as goofy as this sounds, helping me realize things I only ever dreamed of as a socially awkward grungy kid in middle school. Releasing that first record was really a dream come true. I never thought I’d actually get to do that.

Brandon: We are planning more tours for 2018! Are you excited? What is your favorite part of touring so far? What is the worst thing about it?

Andy: Very excited. Most things about tour are my favorite. Traveling around the country with my friends, playing music every night, eating greasy delicious garbage food that Tyler finds in a hole in the wall, hanging out with your dad. Worst things are fog, flat tires, allergic reactions and snoring (I don’t snore).

Brandon: Where do you hope to find Why They Came 10 years from now?

Andy: On Mars. Singing about the hazy pink sky. Next stop on tour is the moon, before our homecoming show in Dexter’s basement.

A Stick Full of Bells will be released on Thanksgiving 2017, exactly one year after the release of Why They Came’s Holy War Hymnal LP, but it is available right now to our $3/month and up supporters on Patreon! Check out the full album preview below…

Why They Came “A Stick Full of Bells” Preview

A studio Christmas LP from Why They Came! Available Now: http://badapplerecords.net/product/came-stick-full-bells-lp/?utm_source=YouTube&utm_campaign=A%20Stick%20Full%20of%20Bells